The memories of watching pro-wrestling during the attitude era were glorious. It was a time of growing, entertainment, and unpredictability. But more importantly a lot of the excitement came from fan involvement.

Now, there are two kinds of fan involvement: the good kind of cheering a face (good guy) and booing a heel (bad guy) while safely sitting in your seat.

And of course there’s the very best kind of fan involvement, which happens when fans rush the ring during an active match/interview; confront wrestlers in and outside of the arena; attack wrestlers for no particular reason and of course all of the above.

Most of the time when fans get involved inside the arena, security usually thwarts them before they can do much, or the wrestler avoids the situation all together. But every now and then that spectacular moment unfolds of uncensored mayhem between a fan and a wrestler that you don’t want to fuck with.

“Fan”demonium: Will throw a drink in your face and spit in your girlfriend’s.

Does tag team legend like Buh-Buh Ray Dudley, who changed the way we watched wrestling, take things a little too far with fans? I’ll rephrase that question: Would a guy with the name “Buh-Buh Ray” take anything a little too far?

Yes, thankfully, he would.

Before The Dudleys were fan favourites in the World Wrestling Entertainment, they were the hated assholes of Extreme Championship Wrestling (ECW). They picked fights with the audience before matches would even start. Buh-Buh would have the golden tongue on the microphone and insult unsuspecting people sitting in the front row.

Besides being fucking hilarious, in those videos you’ll see a few things: Buh-Buh antagonizing a fan so much he decides to climb down the fucking balcony, jumps the barrier to tries to fight him. And Buh-Buh taking a beer out of one fan’s hand, throwing it into another fan’s ugly mug, and finally spitting in some woman’s face. 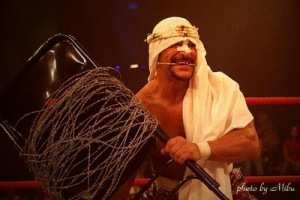 Who would ever fuck with Sabu? Besides being the biggest daredevil on the list, he’s also the craziest looking and covered in scars, probably from his days of fighting lions.

If you’ve seen Sabu wrestle, you’ll know he’s got to be a somewhat lunatic to begin with; jumping through tables and participating in barbed wire matches (yes, that is suppose to be plural). Well apparently some jackass fan had never heard of Sabu before (to have such poor judgment there’s just no way) and he cooked up the clever idea to tear off Sabu’s signature headdress during his entrance.

The result is Sabu showing absolutely no fucking restraint and jumping the barrier like Indiana Jones and beating the fan’s face like he was looking for information.

Yeah, that was a good idea, buddy. 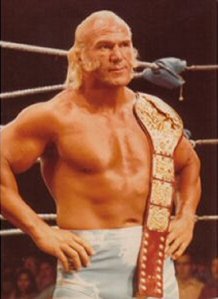 “Fan”demonium: Don’t jump in the ring with him. For the love of Jesus, don’t.

Graham was the Hulk Hogan before Hulk Hogan. Charismatic, flowing blonde hair, colossal stature, am I forgetting anything? Oh right, a killer instinct like a fucking caveman defending his freshly picked blueberries.

Like the beginning of all the stories, it starts with light-bulb going off in a fan’s head that decided in one form or another to fuck with said wrestler. If you ever hopped into the ring with Graham that light-bulb should immediately turn into a flashing and alerting beeping noise like a meltdown is in process at a nuclear power plant. Your life is in danger. Seriously.

A particular fan was nearly beaten to death by Graham after slipping into the ring with him. Eyewitnesses say the only reason Graham let up was because Jimmy Hart begged and pleaded with Graham for the man’s soul. 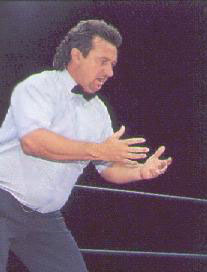 Okay, so I cheated a bit. “Pee Wee” was a referee and not actually a wrestler. The late “Pee Wee” Anderson was this short guy, with fucking Saved By The Bell A.C. Slater hair and surrounded by monster wrestlers who were more than capable of protecting themselves. If “Pee Wee” had only saw it that way.

Bottom line, if you were endangering the wrestlers while Pee Wee was there, he’d be coming for your head like Sarah Connor’s. I also wouldn’t count out Pee Wee being a T-1000 judging on how he handles this fan with ease.

Not only did that moron get completely owned, it was by the least intimidating person imaginable. This was like Epic Beard Man for the 90′s. We just needed Pee Wee to shout, “Don’t fuck with me!”

The late great “Macho Man” was more like his Spider Man alter ego “Bone Saw McGraw” when it came to fan involvement. Pretty much fuck fans. It’s obvious a few screws had popped loose in Savage’s head and he took full opportunity of his mental unstable-ness whenever fans fucked with him. OOH YEAH and they fucked with him all right!

As seen in these separate incidents where Bone Saw was put to the test and passed every time.

WHAT DO YOU MEAN I HAVE TO STOP KICKING HIS FACE?!

During another encounter where, you guessed it, a fan jumped into the ring with Savage, Kevin Nash and Scott Hall, Nash saved the guy’s life from Savage and Hall’s full on attack. Getting in between the three, Nash threw the fan to the outside where he was able to scurry away like a cockroach in the light.

“Fan”demonium: Will punch you in the mouth (even if you’re a girl)

YES 2 JERICHO (beating the shit out of fans!)

Y2J is the lone Canadian on the list you definitely don’t want to fuck with. But of course, what kind of article would this be if wrestlers like Jericho didn’t want a piece of the hostile, asshole fans just as much as they wanted a piece of him?

Besides being a brilliant entertainer, Jericho isn’t shy to speak his mind or unload his fists. A couple fans found this out first hand (pun not intended.)

In Jericho’s defense, those security guards were doing a piss poor job with crowd control.

During another classic fan encounter, Jericho is walking to the ring when he’s blindsided by a fan who’s being tackled by security. Before the camera could cut to another wrestler, you can see Jericho throwing a hay maker at the clearly-not-a-Jericholic.

“Fan”demonium: Doesn’t Give A Fuck

Behold the one wrestler you do not want to cross or look at wrong for that matter. New Jack dares you to confront him inside or outside the ring. He was one half of the tag team The Gangstaz and looks like he’d have no problem shoving a shank into your liver during a prison fight.

The under aged wrestler apparently looked like Ralph Kramden, the fat guy from The Honeymooners. The whole fiasco ended in lawsuits (New Jack was later cleared) and almost caused ECW to have their very first pay-per-view canceled in 1997.

Now, this was a fellow wrestler that New Jack beat up. I wonder what he’d do to a fan? …

So just to recap: New Jack is pretty sure he’s been sued more times than any other wrestler for fighting fans; he’s deceptive and tricks fans into getting their asses kicked and he looks at fighting fans like he would if a midget kicked him. Pure crazy is the best kind of crazy.